On Today’s episode we quickly go over our weeks in video games, then we jump right into covering all of this weeks news inside the Blizzard Entertainment Universe. Then we drop a basic campfire and talk about our World of Warcraft! This week we discuss the toxicity of community, harsher punishments for deserters, some love for the lore aspects of the game, and then we wrap it up by talking about the item level increase.

Then we switch things up and move onto the StarCade! This week we cover Psionic Warfare: Total Destruction, a Blizzard Arcade Free to Play third person shooter. Then we move over to our Community Creation part of the show were we show another beautiful Diablo 3 fan creation!  Then we move over to the Icebox where we answer an email from Zach! If you have any questions, comments or concerns for the show, feel free to email the show at IceBox@FrozeNerdz.com. Then we wrap up the show thanking those people who supported the show this week and then we say our weekly goodbyes. So sit back, relax and enjoy Episode 54 of the Frozen Nerdz Podcast.

The Season 2 ladder maps have been announced and released. Here is the list of the 2015 1v1 Season 2 Maps: Expedition Lost, Vaani Research Station, Inferno Pools, Coda, Echo, Cactus Valley and Iron Fortress. For all the details, check out this link! 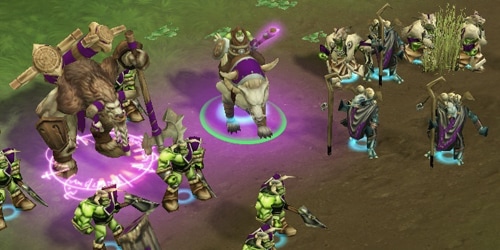 Also, Starcraft II: Legacy of the Void Closed Beta starts on March 31st, 2015. If you are interested in getting into the Beta, go here to sign up!

Playing Heroes is always better with friends, and soon you are going to be able to play Team League with your friends! But you don’t want to wait until it’s available because you will have to be level 30 while owning 10 heroes in order to participate in Hero League! Find out more about Hero league by checking out the HotS Blog!

The Heroes of the Dorm finals are already upon us! They will be held on April 26th, 2015 at the Shrine Expo Hall in Los Angeles, CA. This will place the top college teams against each other, and you will be able to watch this tournament on ESPN! For more information about this event, and Heroes of the Dorm, check out this blog!

The new Heroes Battleground Tomb of the Spider Queen has crawled it’s way into the Nexus. But before you dive in, check out this video and blog all about how to play this new map. Click here for more information!

On April 2nd, 2015 the new Blackrock Mountain Adventure goes live! No, this is not an April Fools joke, this is real! This will be the second adventure expansion for Hearthstone and you won’t want to miss your chance to pre-order your copy today for your exclusive card back!  For more information about Blackrock Mountain, check out this blog article!

Last week, the Diablo Team sat down for another Tavern Talk and the video is now available! To see more about what they talked about, check out the blog article, or simple play the video below!

Want to play like a Diablo pro?! Try using Tacotraps Double Scorpion Support Barbarian! But why take is from us Nerdz, check out the article from the Diablo Team!

Diablo can be a very complicated game, and becomes more complicated when your are trying to figure out how to use your hard earned Legendary gems. But thankfully, Reddit user Jerbookins has created an amazing Gem Calculator to help you make the right decisions! Check out the article here!

The Wow tokens have been annoucnced and will be making their way into the game soon ™! But there is going to be a lot of regulations and rules behind how Blizzard is going to handle the purchasing of these items inside the game. Check out the official release information here.

The long awaited Legend of Zelda for the Nintendo Wii U, is being delayed past 2015 and Nintendo has announced that they will not be attending E3 this year in order to focus on getting the game polished and ready for the players. You can check out the Polygon article about it here.

1.) With recent efforts in both Hearthstone and Heroes of the Storm to mitigate the toxicity of community interactions, is there more that can be done in World of Warcraft to reduce these unwanted people from making life harder on everyone?

2 .) Should blizzard implement harsher punishments for Battleground/Looking for Dungeon deserters?

3.) Should Blizzard release more lore type stories similar to the Shao Hao videos to help introduce players to the lore aspects of the game?

4.) After raiding with the new item level increase was it enough alleviate the “over-tuned” speak? What fights still seem over-tuned if it didn’t?

This Week’s Game: Psionic Warfare: Total Destruction
Type: Third Person Shooter
Creator: Crainy
Details: After being dropped off on a different planet, the hero finds himself up against endless waves of Zerg. Your job is to kill everything before it kills you! For more information about the game check out this blog!